Dabney Sanders, “Greensboro Downtown Greenway: Bringing us Together and Setting us Apart” (April 22)

“Greensboro Downtown Greenway:  Bringing us Together and Setting us Apart” 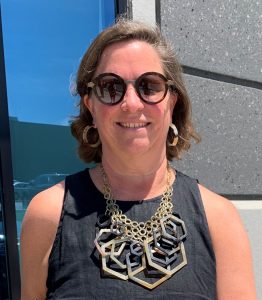 Dabney works as the Project Manager for the Downtown Greenway – a collaborative project of Action Greensboro and the City of Greensboro.

Dabney grew up in Rhode Island, graduated from Sewanee:  The University of the South in 1987 with a major in Natural Resources (Forestry & Geology) and a minor in Botany.  She moved to Greensboro in the fall of 1999 with her husband, Walker, when he joined the Community Foundation of Greater Greensboro as its President.

In addition to her work, Dabney is involved in a number of volunteer activities including leadership roles with Triad Stage, Eastern Music Festival, the Public Art Advisory Committee for the Piedmont Triad International Airport, and Greensboro Bound, a literary festival celebrating its third anniversary this May.  She is a former Board Member of the Weatherspoon Art Museum and former Board Chair of Green Hill Center for North Carolina Art. Dabney has served as committee member and chair of numerous fundraising events for a variety of non-profit organizations.

Dabney was named the 2019 Jim Roach Downtown Person of the Year by Downtown Greensboro.

Dabney enjoys Greensboro and lives happily in Fisher Park with her husband Walker (a Greensboro Rotarian), their dogs Hudson and Scout, and their chickens Flora and Violet.

Note: this meeting will be conducted in a virtual environment. The meeting link will be emailed to all members. Guests should contact the Club Administrator at pcash@greensbororotary.org.