Bobby Bain, “The History of the GGO/Wyndham” (August 11)

The History of the GGO/Wyndham Championship 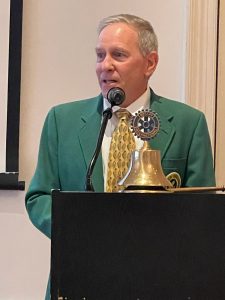 Bobby Bain was born in Greensboro, where he has lived since. He attended NC State University and earned a BS and MS in Industrial Engineering. He started working at Bail Oil/Bain HVAC in 1973.

Active in service for the greater good, Bobby started by joining the Greensboro Jaycees in 1974.  In 1982, he served as Charmian of the Greater Greensboro Open (GGO), which at that time was managed by the Jaycees.

He also served as President of the Boys and Girls Club, Crime Stoppers, the Western NC Chapter of the Alzheimer’s Association, and the Jaycees Od-Timer’s.

Bobby became a Rotarian in 1985, sponsored by his father Carson Bain. He went on to serve as President in 2017-18 and currently serves as Secretary of the Board of Directors. Bobby is a sustaining Paul Harris Fellow.

Bobby has been married to wife Vicki for 25 years and has two daughters and one son.