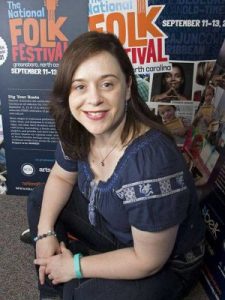 Amy Grossmann is President & CEO of the NC Folk Festival – a three-day celebration of folk and traditional arts held annually in the city of Greensboro, NC. Amy’s nonprofit career has focused on building programs that celebrate diverse expressions of culture.  Amy has held roles with major cultural institutions including the ArtsGreensboro, the Maryland State Arts Council, the National Council for the Traditional Arts, and the John F. Kennedy Center for the Performing Arts.

Amy’s expertise as a festival producer brought her to Greensboro in 2015 to direct the National Folk Festival’s three-year residency in this community.  In 2018, Amy led the event’s transition to become the North Carolina Folk Festival and now oversees the independent nonprofit organization that continues to produce the festival annually.

Amy holds a bachelor’s degree in music from the SUNY Geneseo, and a master’s degree in arts management from American University.