The Millennial Campus Initiative and the Community 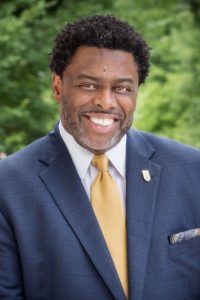 The Board of Governors of the University of North Carolina elected Dr. Franklin D. Gilliam, Jr., as the eleventh Chancellor of UNC Greensboro (UNCG) on May 22, 2015. Chancellor Gilliam brings to UNCG and the UNC System a wealth of experience from a career that spans more than 30 years in higher education. He took office on September 8, 2015.

During his tenure, UNCG has surpassed a record 20,000 students; grown its endowment, research enterprise, and overall facilities and campus infrastructure; significantly increased its fundraising; and elevated the presence, reputation, and real-world impact of the largest university in the North Carolina Triad region.

Prior to this appointment, Dr. Gilliam served as Dean of the UCLA Luskin School of Public Affairs for seven years and was a longtime UCLA Professor of Public Policy and Political Science. His research focused on strategic communications, public policy, electoral politics, and racial and ethnic politics.

As Dean of UCLA Luskin, Dr. Gilliam shepherded a $50 million naming gift and launched and executed an ambitious strategic plan and capital campaign, establishing the school as a regional leader in addressing and finding solutions to some of society’s most pressing problems.