Mark Robinson, “Traveling with the Aggies–A behind the scenes look at travel logistics for an SEC football team” (May 27) 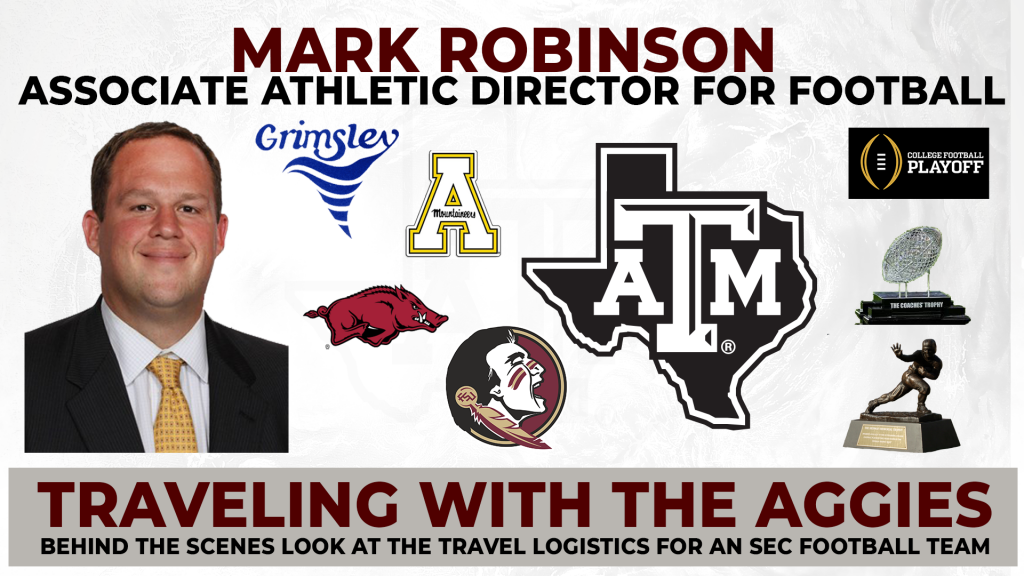 A native of Greensboro, son of Rotarian Freddy Robinson, and a Grimsley High School alumnus, Mark Robinson returned to Texas A&M as Associate AD for Football after serving in a similar role on Head Coach Jimbo Fisher’s staff at Florida State.

Robinson has helped develop and oversee several multi-million dollar renovation projects of football facilities, including the coaches’ offices, locker room, lobbies and player’s lounges. Following the 2015 season, he was named the nation’s top Director of Football Operations during the FootballScoop FBS support staff awards presented by ProGrass at the AFCA Convention.

During his five-year stint in Tallahassee, Robinson was a part of the Seminoles’ 27-game winning streak from 2013-14 and made trips to the 2013 BCS National Championship Game, 2014 College Football Playoff, Chick-fil-A Peach Bowl, Orange Bowl and 2013 and 2014 ACC Championship games. Each season under Robinson, Florida State had at least one player drafted in the first round as FSU set the modern day record for the most players selected in three consecutive drafts (2013-15).

Robinson oversaw all the daily operations of the Arkansas football program after beginning his stint there in January 2008. He was responsible for the operation of the football program’s budget, scholarships, team travel, housing, camps and clinics, NFL relations and other administrative responsibilities. Robinson served as the staff liaison to the Southeastern Conference. He also monitored and recorded all athletic related events for the football program.

Robinson was part of three bowl appearances at Arkansas coordinating the Razorbacks’ trip to the 2010 Liberty Bowl, the 2011 Sugar Bowl – the first BCS game in school history – and the 2012 AT&T Cotton Bowl Classic.

Robinson served as the Assistant Director of Football Operations at Texas A&M from 2003-07. At A&M, he assisted with the day-to-day operations of the program, including team travel, practice, game day operations, recruiting and coaching. He assisted the staff with recruiting letters and videos, worked with the compliance office, handled player guest tickets, coordinated various activities and functions related to three bowl games, assisted with recruiting weekends and official visits, put together a player policy manual and supervised team-building activities.

Robinson played on the offensive line at Appalachian State from 1998-2002, where he earned his bachelor’s degree in communications. The Mountaineers were ranked in the top 10 in the nation in I-AA and earned playoff bids all five seasons. He set the school record with a 615-pound squat lift and received the Strongest Player Award on the team his senior year.

Note:  This is a virtual Zoom Meeting. For an invitation, please email the Club Administrator at pcash@greensbororotary.org.