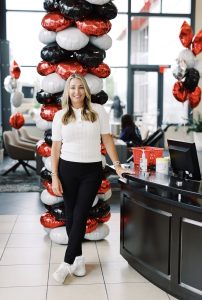 Mary oversees Rice Toyota and Collision Center in Greensboro, a business that generates over $140 million in sales annually with 189 associates. Rice Toyota is the oldest dealership in Southeast Toyota, opened in 1965 by Mary’s Grandfather Garson Rice Sr and then subsequently operated by her Father Garson Jr for 40 years. Mary has been the Toyota General Manager of Record, which grants full operational authority of the dealership since 2014, and assumed the role of Dealer Principal in 2021.

When Ms. Rice is not at the Dealership, she enjoys spending time with her 2 small children. She also enjoys working out at PureBarre Greensboro with her friends.

To Attend Virtually: The Zoom link was provided in the newsletter that was published on the Monday before this date.