John Evans, “The Future of America’s Army and Its Threats Moving Forward” (October 2)

The Future of America’s Army and its Threats Moving Forward 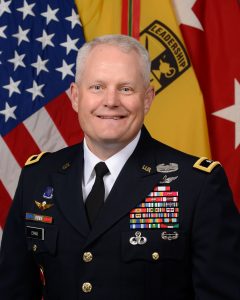 Major General John R. Evans, Jr was commissioned in 1988 as a Distinguished Military Graduate from Appalachian State University.  He was assigned to the Aviation Branch and completed flight school in 1990. The Major General is also a graduate of Western Guilford High School.