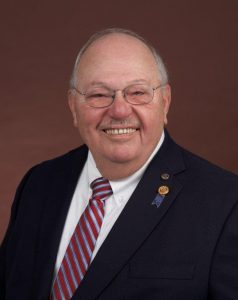 Randy grew up in Guilford County, NC and earned his BS Degree in Biology from UNC-Greensboro. After a brief career in Education, Randy made a career change in 1982 to Human Resources Management and worked with manufacturing and textile firms primarily in N.C. In 1998 he started his own company, Prime Personnel Resources., Inc. located in Burlington, N.C. Prime Personnel Resources, Inc. is a full service staffing agency specializing in temp to hire, professional placement and on-site staffing management. The firm currently employs 10 full time staff members who are dedicated to serving business and industry in Piedmont NC.

Randy is married to Reida Perkins and they have two children, Auburn and Reid and three grandchildren. Randy and Reida live in Burlington, N.C.

In 1998 Randy joined Alamance Breakfast Rotary Club and served as Club President in 2001-2002 andfrom 2003-2007 he served as Area 3 Assistant District Governor and was awarded the Four Avenues of Service Citation for Individual Rotarians in 2006. In 2007 Randy joined the Alamance Club where he served on the District Finance Committee and is currently serving as Area 3 Foundation Advocate. Randy and Reida participated in a Polio National Immunization Day (NID) in India with several other Rotarians inFebruary 2015. Randy and Reida are Paul Harris Fellows and Randy is a member of the Paul Harris Society.