Nashon Wilhite, Player of the Week 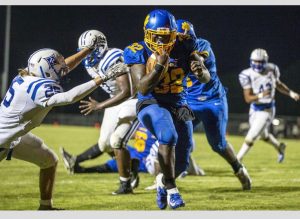 Nashon Wilhite is a junior running back on the Dudley Panthers football team. Along with being an outstanding football player, Nashon is one of the hardest working players on the team. According to Coach Steven Davis, he is a soft-spoken young man who leads by example and demonstrates a caring attitude towards his teammates and others which really puts him in high regards with the coaching staff. Nashon also does things to help younger players on the JV team as well as helping the youth in his community.

The Greensboro Rotary / Bob Sawyer Award began in the fall of 2013 for Guilford County High School football players. This award is in honor of long-time coach, athletic director and Greensboro Rotarian, Bob Sawyer, who remains a legend in North Carolina high school athletics.