Javondre Paige, Player of the Week 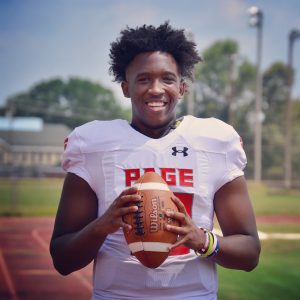 Javondre Paige of Page High School is the first winner of the Greensboro Rotary Bob Sawyer Award for the 2018 season. Paige, QB, had an excellent game. He accounted for over 300 yards of offense and 4 TDS.

The Greensboro Rotary / Bob Sawyer Award began in the fall of 2013 for Guilford County High School football players. This award is in honor of long-time coach, athletic director and Greensboro Rotarian, Bob Sawyer, who remains a legend in North Carolina high school athletics. Leading Grimsley High School’s swimming teams to 16 consecutive championships and an unprecedented 15 straight NCHSAA state titles, Sawyer was inducted into the East Carolina University Hall of Fame in 1974, and was enshrined in the NC High School Athletic Association Hall of Fame in 1995.