The Power of Change 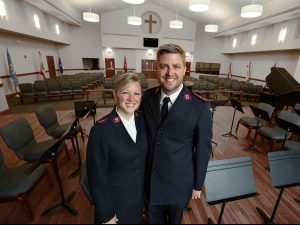 Captains Matt and his wife Jessica Hedgren joined The Salvation Army of Greensboro as our Corps Officers in June 2018. As children to Salvation Officer parents, they both got a firsthand look on what it means to serve the least, the last, and the lost. It was not until later in life that God placed a specific calling on both of their lives to become Salvation Army Officers.

Captain Matt Hedgren received a Bachelor’s Degree of Architecture from The University of Oklahoma and pursued a life as an architect until God pulled at his heart to full time ministry. Matt and his wife followed the calling to ministry with The Salvation Army through the Evangeline Booth College, receiving their Bachelor of Arts in Practical Ministries.

Captain Hedgren finds it a privilege to be able to work on the front lines of meeting human needs without discrimination in this community and they would like to thank the community of donors, volunteers, and supporters who have come alongside The Salvation Army to accomplish such a great task.