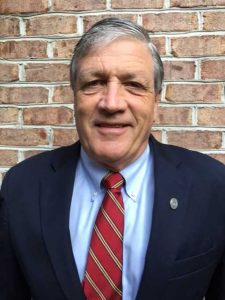 Mark is a graduate of the University of Massachusetts at Amherst School of Business and spent most of his career as a textile sales executive.

This is the 100th Anniversary of America’s involvement in World War I. Mark was very close to his paternal grandfather, Ove Mortensen, a Danish immigrant, who fought with the Marine Corps in WWI. He is proud to have written the biography of his grandfather’s battalion commander titled: “George W. Hamilton, USMC: America’s Greatest World War I Hero”. Col. Col. William V. H. White USMC (Ret) stated: “Mortensen has performed a great service to the Marine Corps and to World War I scholars by telling the story of this exceptional Marine. Hamilton, who has been relatively forgotten, was, by any definition, one of the true “Giants of the Corps”. The first curator of the Marine Corps Museum called Hamilton “…the most outstanding Marine Corps hero of World War I” and a Leatherneck magazine article listed Major Hamilton as one of the top ten toughest Marines in History. June 6, 2018 is the 100th Anniversary of a battle for which Hamilton was twice recommended for the Medal of Honor.

Mark is honored to be a guest speaker June 30th at the Gettysburg Heritage Center and July 20th during the Marine Corps WWI Centennial Anniversary at Quantico, VA.

He lives in Summerfield with his wife Laura and they have two sons.