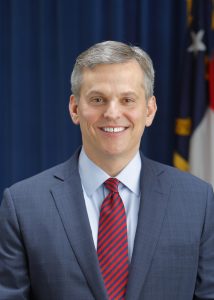 Stein has made combating the opioid epidemic a top priority. His office drafted the STOP Act to reduce the number of people who become addicted to opioids through smarter prescribing practices, the HOPE Act, which gives law enforcement additional tools to stop the flow of prescription pain pills into the drug trade, and the Synthetic Opioid Control Act to crack down on the trafficking of illicit Fentanyl. All three laws were passed by the General Assembly and signed into law by Gov. Roy Cooper.

His Department of Justice won awards or settlements of more than $80 million from scam artists. He is working to improve data security and is leading a national effort combat robocalls. Additionally, his office has recovered nearly $50 million from tax cheats and health care providers defrauding Medicaid over the past two years.

He opposes offshore oil drilling along North Carolina’s coast and fights to ensure that polluters are held accountable to clean up the messes they create.

Stein grew up in Chapel Hill, is a graduate of Dartmouth College, and earned law and public policy degrees from Harvard University. He and his wife Anna have three children – who all attend or attended North Carolina public schools, like Anna and he did. He previously served as a state Senator and as Senior Deputy Attorney General in the North Carolina Department of Justice

Pat Vreeland, a Rotarian, a sustainer with the Junior League of Greensboro, Read more...