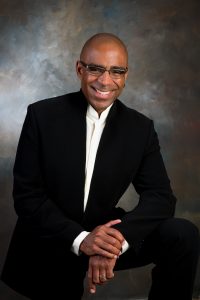 Named a 2005 MacArthur Fellow, President Obama’s first appointment to the National Council on the Arts and Governor Snyder’s appointment to the Michigan Council for Arts & Cultural Affairs, Aaron P. Dworkin served as dean of the University of Michigan’s School of Music, Theater & Dance (SMTD). He is currently a tenured full professor of arts leadership and entrepreneurship at SMTD as well as serving as a Professor of Entrepreneurial Studies at the Stephen M. Ross School of Business at the University of Michigan.

Aaron founded The Sphinx Organization, the leading arts organization with the mission of transforming lives through the power of diversity in the arts. He also serves as host of the nationally-broadcast Arts Engines show in collaboration with Detroit Public Television.

As a best-selling writer, Aaron has authored The Entrepreneurial Artist: Lessons from Highly Successful Creatives published by Rowman & Littlefield, a science-fiction novel, Ethos: Rise of Malcolm published by MorganJames, as well as his memoir titled Uncommon Rhythm: A Black, White, Jewish, Jehovah’s Witness, Irish Catholic Adoptee’s Journey to Leadership released through Aquarius Press, a poetry collection, They Said I Wasn’t Really Black, and a children’s book The 1st Adventure of Chilli Pepperz.

A lifelong musician, Aaron is a prominent spoken-word performing artist represented by Cadenza Artists with a current national tour of his American Rhapsody with a national consortium of orchestras and premiered with the Minnesota Orchestra and Maestro Osmo Vänskä. He has collaborated with a breadth of artists including Yo-Yo Ma, Damien Sneed, Anna Deveare Smith, Damian Woetzel, Lil Buck and others.