Victoria and Ron Milstein, “Women of the Shoah – Jewish Placemaking” (May 18)

Women of the Shoah – Jewish Placemaking 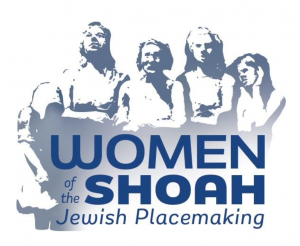 “She Wouldn’t Take Off Her Boots” will be North Carolina’s First Women’s Holocaust Memorial Monument. This original sculpture by artist Victoria Milstein will honor the strength and resilience of all women and was inspired by a photograph of an actual atrocity in 1941. Victoria and others have created Women of the Shoah as a non profit organization to plan, create and coordinate all aspects of the Holocaust Memorial and Monument as it is unveiled and opened in 2023. Funding for the project will be provided by private donors and by the State of North Carolina.

The Memorial Monument will be beautifully situated in LeBauer Park, one of Greensboro’s preeminent downtown parks, becoming a place for the community to learn about and from the Holocaust, and have the impactful opportunity to be a witness to history. The Monument will honor those who perished and make a statement against the murder of women and children, antisemitism and all genocide. It will educate new generations about how the past can inform the present and future. 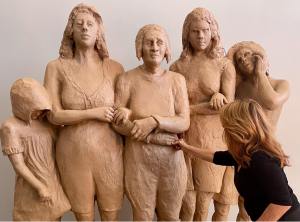 This initiative will serve as a resource to effectuate North Carolina’s Holocaust Education Act, which requires the State Board of Education to develop a curriculum] that includes instruction on the Holocaust and genocide. Situated near cultural and educational institutions and in the heart of downtown, the monument will offer visual tools for scholars and Holocaust educators and include on site educational presentations accessible through QR codes with cell phones. The site will also serve as a place to gather for programs and events that reflect and enhance our values and foster community among all our citizens.

Women of the Shoah is proud that the site of this monument will be in Greensboro, a city that recognizes the diversity of our community and is committed to using the Arts as a vehicle to educate and unite in the pursuit of social justice.

Victoria Milstein has been a professional artist creating portraits, paintings and sculptures over a long and illustrious career. She left New York’s prestigious School of Visual Arts to live and study in Israel at the Bezellel Academy of Arts before settling again in New York, where she raised her family before moving to Greensboro in 2011. Victoria owns and operates the VCM Art Studio downtown where the Monument is being created. Victoria’s husband Ron is a member of the Rotary Club of Greensboro.