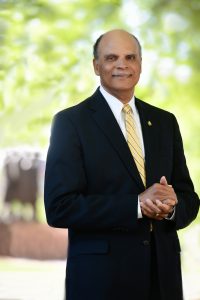 Dr. Harold Lee Martin Sr. was elected 12th chancellor of North Carolina Agricultural and Technical State University on June 8, 2009, bringing more than 30 years of transformative leadership experience in higher education. He is the first alumnus to serve as the university’s chief executive and administrative head.

An advocate of community engagement, Martin serves on various boards in the Piedmont Triad and across the nation. In 2017, he was named the most influential president of 2016 among the nation’s historically black colleges and universities. He was also one of the Triad Business Journal’s Triad Power Players (2017), Most Admired CEOs (2016), Most Influential People (2015 and 2016). Previously, he was named to the EBONY Power 100 list and was a recipient of the Thomas Z. Osborne Distinguished Citizen Award from the Greensboro Partnership. He is a member of the Rotary Club of Greensboro.